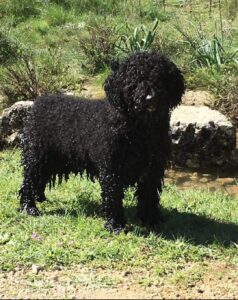 The spanish water dog has risen rapidly in our country, thanks to a considerable number of enthusiasts and an enthusiastic group of breeders who have raised the quality of breeding and increased circulation.

The assocition who deal with native canine breeds is known as The Central Society of Promotion of the Canine Breeds of Spain (R.S.C.F.R.C.E) since May 1985, having been accepted by the International Canine Federation (F.C.I) in 1999.

Its name has various synonymies depending in the geographic zone. It has so been know in the South of Spain as “turco andaluz” Andalcian turk, “laneto” Little Wool, “perros de lanas” Woolly dogs, “lanudo” fleecy and “patero” wily.

It has many qualities creating the ability to master multi role tasks and varying functions such as sheep herding, retrieving and hunting. These are the primary characteristics of the breed.

This breed is classified in group VIII, corresponding to retrievers, hunting retrievers and water dogs referred to in the third section. 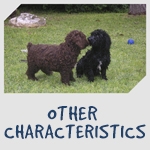 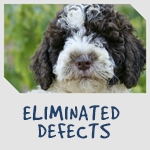